You know you’re at the right racing school when you find yourself sitting through classroom introductions and three NASCAR Truck Series drivers introduce themselves from the back of the room. They were there to prep for their upcoming road course race at Mosport; I was there to become a better racer and I knew immediately that I was in the right place. We were at The Bob Bondurant School of High Performance Driving, located just outside of Phoenix, Ariz. The school opened its doors to the first lucky students on Feb. 14th, 1968 and has since graduated almost a half a million students.  It has been a staple in the motorsports community for more than 40 years, serving as the go­ to place for everyone from a teenager just learning to drive, to a seasoned race car driver honing his skills.

You can’t really begin to talk about The Bob Bondurant School of High Performance Driving without first talking about the man himself, Bob Bondurant. You may know the Bondurant name from his renowned driving school, where Bob has taught people from all walks of life to be better drivers — from A-list movie stars to seasoned race car drivers and everything in between. Or you may know him from his days of driving Formula 1 cars. I’ll add another title to Bob’s long list of skills:  Storytelling. I could literally sit and listen to weeks upon weeks of his awesome racing stories; stories that take their roots from his days of driving for the who’s who of racing teams like Shelby American, Lotus, Ford  and Ferrari. Driving at such legendary tracks as the Nurburgring, Daytona, Sebring, Spa and Monaco and working with personalities such as Carroll Shelby, Enzo Ferrari and Dan Gurney.

When I sat down to get to know Bob I had no idea what I was in for. Sure, I knew about some of the teams he drove for and some of the racecars he piloted, but I did not know how important of a role his career played within the history of American motorsports. He shared with me about how he got his first big break after out-qualifying Carroll Shelby and his mighty Cobras at Laguna Seca and Panoma, which later prompted a phone call from Carroll Shelby himself. Carroll wasn’t too happy about being out-qualified by Bob and his Corvette so he got on the phone and asked if Bob wanted to drive his Cobra in an upcoming race at the Continental Divide Raceway, just outside of Denver, Colo. Actually, it wasn’t so much of a request; rather it was Carroll’s style to tell his drivers what he had on his mind. And in this case Carroll told Bob “You’re driving Ken Miles Cobra.” It was a one race deal that laid the groundwork for all of the future success that Carroll Shelby and Bob Bondurant would later enjoy.

The biggest of which came when Shelby and Bondurant teamed up in 1964 to win the legendary French endurance race – The 24 Hours of Lemans. Driving a Shelby Daytona Cobra Coupe, the team almost won the race outright, finishing an impressive 4th overall in the GT class and beating the mighty, previously unbeaten Ferrari 250 GTOs in the process. As the famous Carroll Shelby quote goes, “Ferrari’s ass is mine,” it was Bob who delivered the win for the American team on the Fourth of July. It was a patriotic win for the southern California group of racers that took on the best of the best from all over the world and came out on top. What these young American racers accomplished in Europe, at the highest levels of motorsport, is astounding. I equate that win at Le Mans with the Miracle on Ice in 1980, when the U.S. beat the heavily favored Soviet Union in the medal round. In 1965, the boys went one better than a class win at Le Mans when they beat Ferrari for the first time ever to capture the World Manufactures Championship. An American driver, an American car and an entrepreneurial spirit enabled the team to sit atop the sports car world. It doesn’t get any bigger or better than that, folks.

Bob peddling his Shelby Daytona Cobra Coupe to a GT Class win at the 1964 24 Hours of Le Mans. (Bondurant Collection)

The accomplishments that Bob quickly racked up during his career had him on a path to become one of the all-time greats in motorsports. Until an accident during a CanAm race at Watkins Glen changed everything.  He was driving a McLaren Mk II when a steering arm snapped at 150 mph. He hit a berm that launched his McLaren 50-feet into the air, flipping the car eight times. Bob woke up in the hospital, after briefly advising, as any true racer would, to the paramedics to not cut into his expensive racing suit. He needed a new plan and what he came up with changed the motorsports community forever. He set about opening a driving school to teach people how to be better drivers. By sharing his knowledge and experience gained during his racing career he would go on to open the Bob Bondurant School of High Performance Driving, starting out at a little raceway outside of Los Angeles with only three Datsuns, a Formula V and a Lola T70.

I wouldn’t exactly classify myself as a fan of normal school growing up, but the second I walked into this classroom I found a front row seat and keep my attention glued to every word from my three instructors for the week. There were a total of eight students in my four-day Grand Prix Road Racing course. My instructor, Rob, was assigned to only one other student and myself, making for a fantastic student to instructor ratio. The small class size is only one of the features that sets this school apart from others. Don’t let the classroom talk fool you, this school is centered on a hands-on experience, allocating 80 percent of the four-day course to behind the wheel action. And when I say hands-on, I mean you get to run multiple hot lap sessions in the various cars that you get to drive at the school.

Speaking of cars, here’s what the Grand Prix Road Racing course offered up: a bright yellow, 436hp, 6- speed Corvette C6 Grand Sport was my ride for the first three days. On day four we graduated to the real deal racecar: A Formula Mazda. It’s safe to say that I suffered from rental car letdown at the end of each day.

Day 1started with a quick tour of the facility, followed by a van tour ride around the various features and tracks that the school offered. A van tour sounds boring, huh? Not this one. Instructor Corey hilariously tossed around the 3-ton van while calmly carrying on conversation with the six wide-eyed students sitting behind him. After getting my vertigo under control, we headed to a ground school classroom session that covered such topics as vision, vehicle dynamics and line technique.

Our first practice session was heel-toe downshifting. Heel-toe downshifting is one of my favorite things to do in a car. When executed properly, it’s immensely satisfying to know that you didn’t have to rely on some silly computer to execute a smooth downshift for you. There’s something about the feeling you get from dancing on the brake pedal with the palm of your foot and instantaneously hearing the engine sounds from blipping the throttle with your heel. All of that goodness is occurring while you’re moving your hand to select a lower gear; constantly striving to achieve a smooth downshift right before you turn in to your apex. Get it wrong and you hear crunching synchro’s as you fumble about with the shifter. It’s a dance on the pedals that requires skillful coordination, and it’s a fantastic feeling when you do it right.

I arrived the next morning at the school with the anticipation of knowing I was getting on the race track with my Corvette later that afternoon. Before I could let loose on the track, I hoped into the skid car to practice understeer and oversteer conditions on the school’s skid pad. Bondurant utilizes a specially modified, rear wheel drive Cadillac that had been equipped with a hydraulic system which lifts pre­ selected wheels off the ground in order to demonstrate certain handling situations. The instructor selects a situation and forces the student to quickly react to the cars behavior. This part of the school had me reminiscing back to my high school days of lunch-time parking lot antics after a big snowstorm. My instructor started the session with having me react to understeer conditions and then moved on the more exciting oversteer exercises. To finish off the skid pad session I moved on to practicing figure 8’s. Huge grins followed after each flick of the big Caddy from corner to corner, linking each of my drifts together in a cloud of tire smoke. Awesome.

Next up was track time. We did a quick ground school session to review what we had just learned and then did a lead-follow session on the short course layout to learn the ins and outs of the Bondurant designed 1.6 mile track. Instructor Rob showed us the line with the lead/follow session and then stepped in and out of the cockpit for ride-alongs to show me what I was doing right and where I could improve. Here’s the cool part, Rob identified an area for me to improve and then he moved to the driver’s seat to demonstrate. When I got back behind the wheel I had my first ‘ah ha’ moment and improved upon the two corners that Rob wanted my technique to change. The Bondurant instructors have this innate ability to share their knowledge and tailor it to each student’s needs. These instructors are not just fast race car drivers with a cool day job; they are great teachers of a craft that everyone needs to learn and get better at: Car control.

With the last day upon us, our group moved into a new car: The Formula Mazda. After getting fitted to the car, we had a lead-follow session on the Maricopa Oval, getting used to the handling characteristics of the open wheeled track machine that was night and day different then the Corvette. What’s it like to drive you ask? When you drive a Formula Mazda it feels like an extension of you. No power steering, no assisted brakes … just pure driving bliss out of a purpose built, 1,400pound racecar. It’s a point and shoot racecar that follows the drivers directions to a T. The 13B rotary motor screams its way up to the 6,500 RPM fun limit and then spits flames out of the exhaust when you get on the brakes and start downshifting. Describing it as “fun” doesn’t begin to do it justice. 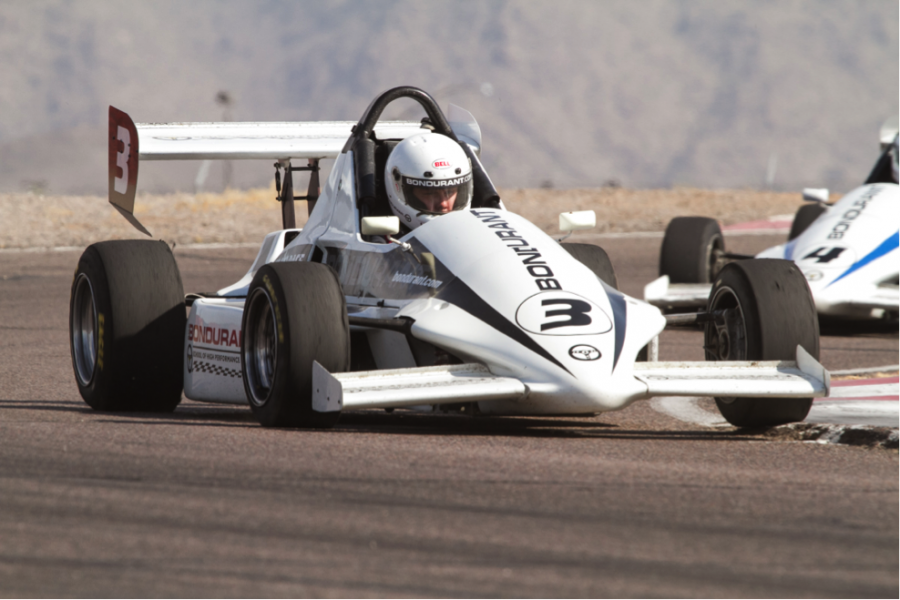 For a fitting end to my time at the school, Bob invited me to sit shotgun for a few hot laps around the Firebird track that he personally designed. He expertly peddled his supercharged, 427 cubic inch Shelby Cobra roadster around the track. The sounds barking out of the side exit exhaust gave me goosebumps. It was like taking a step back in time to see Bob driving that Cobra. I thought about all of his stories about Carroll Shelby, Le Mans and driving at the most famous race tracks from all over the world. At one point during the ride Bob asked me how I liked the ride. Well Bob, to this day I can’t wipe the smile off of my face. That was one hell of an experience that I won’t soon forget.