I don’t know about you, but my youth was spent dreading those terrible words that my mom always seemed to mutter around the late July, early August timeframe. She would ask, “Hey Ryan, are you ready to go back to school?”  Is that really a fair question, I mean come on, what kid is EVER ready to cut short awesome summer days that typically include sleeping in ‘til noon, relaxing by the pool, sports activities and in my case, generally misbehaving and having a blast doing it.  I just chalked up the question to my parents wanting to return to the days of free daycare that school provided.

A few months back I couldn’t wait to go back to school. No, I haven’t turned over a new leaf or grown up one bit. I was anxiously awaiting going back to school – racing school that is. My school of choice was the 2012 Rocky Mountain Vintage Racing School held at Pikes Peak International Raceway, just outside of Colorado Springs, Colorado.

RMVR is a racing club of more than 500 members who love vintage racecars, and like to drive them hard. Their primary focus is organizing and sanctioning races in the Rocky Mountain region and in doing so they provide their members the opportunity to restore, show and race their cars as they competed back “in the era.”  What type of racecars are we talking here? Let’s just say the machinery in the paddock was quite impressive – Corvettes, Porsche’s, Formula Ford’s, MG’s, BMW’s and Formula Vee’s. 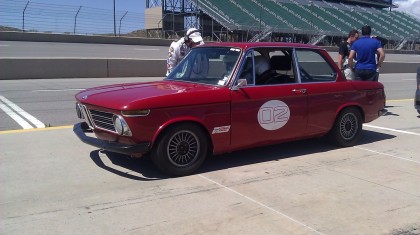 My racecar for the weekend was a 1973 Caldwell Formula Vee, on loan to me from my very trusting friend, David Howland. For those unfamiliar with Formula Vee’s here’s a little background. The class is based on an early ‘60s Volkswagen Beetle and was intended to provide the budget conscious racer a competitive racecar for a reasonable amount of money. It uses lots of stock parts that are bolted up to a custom tube frame, including the 1200cc VW engine, transmission, front suspension, drum brakes and stock wheels wrapped in sticky Hoosier racing slicks. Think bobsled on wheels.

My goals for the three-day racing school were three fold. Get as much seat time as possible, work towards obtaining my competition license and get as much instruction as possible from the impressive list of guest instructors, including professional race drivers Randy Pobst, Mike Pettiford and Alex Figge.

Well I can say that I achieved all of my goals and then some. I got 10 classroom sessions of instruction that preached the basis of exercising precise car control. One of my favorite classroom sessions was on the topic of braking. In my opinion, the best drivers in any racing discipline are typically the fastest not because of the line they take, or how they roll on the throttle or even how good they are in traffic. They are the fastest drivers because they are better in the braking zone. We hit on details such as threshold braking, where the goal is to generate as much braking force as possible without locking up the tires. Every session on the track I progressively tried to incorporate the classroom lessons on the track, working on such things as modulating peddle pressure, not coasting in the braking zone and trying to be as smooth as possible as to not “upset” the car. A Formula Vee is what I call a “momentum car” and they respond nearly instantly to the littlest of driver inputs, making them a great platform to develop your skills from. 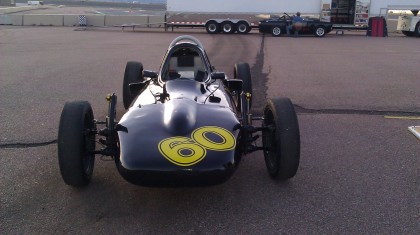 After all of my morning classrooms sessions were done I wandered over the pit lane to try and score some more instruction to build on from my classroom experience. I was in luck. Since I was driving a one seat, open wheel car I was unable to have the luxury of having one of the pro drivers sit next to me during track sessions.  I arranged for a very nice RMVR member to lend out her spec Mazda Miata to professional driver Randy Pobst to give me a ride along tutorial. Pobst expertly flicked the Miata around PPIR like a champ and gave me great pointers all along the way.

As the track sessions’ went on and the Formula Vee run group got closer to the staged student and instructor races, I thought to myself, “Where is the limit in each of the tracks passing braking zone’s and how much grip is available?” Finding the limit in a racecar can be a fine line and I certainly found it in turn 9 at PPIR. I turned into the corner to hit the apex and felt the tail end swapping out on me. My rally and snow/ice driving background kicked in and I quickly buried my foot into the accelerator and dialed in a little opposite lock and the car came right back to me. I was pumped that I found the grip limit in only my second session ever driving an open wheel car.

All in all, it was a fantastic racing weekend that left me wanting more. I learned a ton about improving my craft and had fun doing it. Getting to run flat out in turn 1 and 2, on the banked NASCAR oval at PPIR was one the coolest things I’ve done in a racecar.  I never imagined I would find myself anywhere near a NASCAR track, let alone one here in Colorado. This was my first time out with the Rocky Mountain Vintage Racing group and I left impressed. The racing school ran like clockwork all weekend and all of the members made me feel welcome. There’s a cool sense of camaraderie in RMVR and I’m excited to race with them again someday.