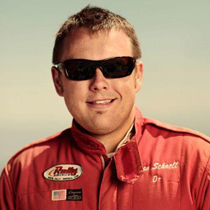 Ryan got the itch to go racing the moment he laid eyes on a racecar. He developed a passion for all things automotive when he would slide his first car, an Audi 80 Quattro on snow packed, twisty mountain roads around his hometown.He started his racing career in 2005, co-driving for a rally team at the legendary Pikes Peak International Hill Climb and has since continued to learn the in-and-outs of motorsports by co-driving in the Rally America National Championship Series. In 2006, he captured the Rally America Regional Co-Drivers Championship and repeated that feat in 2007. Schnell quickly turned his efforts towards moving from the co-driver seat to the driver’s seat and was invited to try out for the factory Volkswagen Racing team in the inaugural VW Jetta TDI Cup Series. Schnell’s favorite race is coincidently the first event that he ever competed in – The Pikes Peak International Hill Climb. Whether he’s competing, advising a team or grabbing a wrench, if it’s got anything to do with Pikes Peak he’s all in. Scratch that, if it’s got anything do with an engine and a steering wheel, count him in.